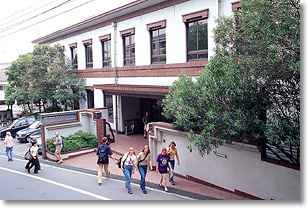 Eight students and one professor from Wake Forest University will spend their 2002 fall semester in Japan as part of a new study abroad/exchange program between the university and Kansai Gaidai University in Hirakata City, Japan, south of Kyoto.

The students will be part of Wake Forest’s growing international studies program, which currently offers study abroad trips to locations including China, France, Spain, Austria, Cuba and Germany. The university has offered similar study opportunities in Japan in the past.

“Returning students almost always say that their study abroad experience was invaluable not only for learning more about another culture, but also for providing insights, perspectives and understanding of their own country,” said Pia Wood, director of Wake Forest’s Center for International Studies. “We encourage all students to travel somewhere during their time at Wake Forest.”

James Ford, an assistant professor of religion at Wake Forest who specializes in medieval Japanese Buddhism, will be a visiting professor at Kansai Gaidai during the fall and accompany the first group of students to Japan. He will teach “Buddhism: From India to Japan.”

At Kansai Gaidai, Wake Forest students will be required to take one Japanese language class and may choose from a variety of other courses in business, economics, social sciences and humanities. Weekend field trips to various cities and historic landmarks are also planned.

The Wake Forest exchange students come from a variety of disciplines, including business, political science and Asian studies. Wood says she expects approximately 12 to 15 students to participate in the program each semester. Kansai Gaidai will send one student each year to study at Wake Forest.

Orientation for the fall semester begins Aug. 25 at Kansai Gaidai. The group will return Dec. 16.

In addition to its study abroad/exchange programs, Wake Forest owns and operates three residential study centers in Vienna, Venice and London. Students study at the residences each semester under the direction of Wake Forest faculty.

In 2001, 52 percent of graduating Wake Forest seniors had studied abroad. “Open Doors,” a publication produced by the Institute of International Education, recently ranked Wake Forest second in the nation among doctoral institutions in estimated participation in study abroad.