‘The holy land of racing’ 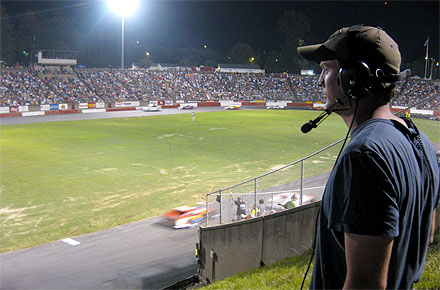 Should Grant Kahler’s instincts for the continuing craze of real-life-meets-television prove accurate, racing at Winston-Salem’s Bowman Gray Stadium could become the next big thing on television.

“Madhouse,” an hour-long weekly series following the personal lives of race-car drivers and their racing highs and lows on the track during the 2009 season, will become part of the History Channel’s lineup on Jan. 10. The program is the latest project for Kahler (’01), a Los Angeles-based freelance film producer and editor with a lingering fondness for his spectator days at the celebrated Winston-Salem racetrack.

“You have basketball in Indiana, you have football in West Texas and you have car racing in North Carolina,” says Kahler, who became a Bowman Gray regular during summer school days at Wake Forest. “There’s next to no money in this kind of racing, yet (the racers) put everything they have into it. The stadium is more than the place where they race. It’s the central battleground where the main characters meet every week.”

It appears that Kahler found those characters straight out of Central Casting. They’re led by the racing teams of Junior Miller and Burt and Jason Myers, two families that Kahler likens to “the Winston-Salem version of the Hatfields and McCoys.”

“It’s a famous rivalry at this little track, where racing has gone on for more than 60 years,” he says. “The Myers family is basically the first family at Bowman Gray. These stories follow the reality of their lives during the week. We see them fix a carburetor in the garage, or we see them take their daughter to the dentist. And then we follow their exploits on the track.”

Bowman Gray is NASCAR’s oldest sanctioned track, dating back 60 years. On Saturday nights from May through August, tens of thousands of fans pack into the storied stadium for “modified” stock-car racing. “This is where grassroots racing comes from,” says one driver in the show. “The Madhouse is the holy land of racing.” “They call it the Madhouse, because it’s a mad house and you never know what’s going to happen,” says another.

Kahler had never heard of Bowman Gray, nor cared about auto racing, when he arrived at Wake Forest in the late 1990s. The son of an executive for an international company, he moved from Pennsylvania to Indonesia at age 10, then on to Hong Kong, where he finished high school. How he ended up at Wake Forest is a story in itself.

While attending a U.S. basketball camp in his native state while in his mid-teens, he played for a team called the Demon Deacons and fell in love with the nickname; so much so that when his tour of potential Southern colleges stopped in Winston-Salem, he quickly ended the search.

Waiting tables in a Winston-Salem restaurant early in his college tenure, Kahler was often regaled by the cook’s stories about the action at a racetrack five miles away. He made a visit and was hooked on racing at Bowman Gray.

“Spending most of my life until college in Southeast Asia, I was nowhere near the culture of race-car driving,” he says. “That’s part of the reason I was just amazed by what I saw.”

What he never imagined was the sport being part of his future.

“I wanted to be an architect my whole life, and that didn’t work out, so I decided to go into advertising,” he recalls. “I took as many film and TV classes that Wake Forest offered. When it was over, I wasn’t sure what I was going to do, but I did know that I wanted to live in New York.”

Kahler worked for two years at NBC as an assistant on the critically lauded television show “Ed.” He dabbled in music video and documentary production and eventually moved to Los Angeles.

Visits to see his family — who had relocated to Chapel Hill — coupled with his own memories of Bowman Gray sparked an idea: Why not capture the soap opera of a race circuit and package it in a series of episodes that could garner an even wider audience?

“These are the most powerful cars under NASCAR, and they can hit 100 mph on a 60-yard stretch of track,” he says. “But we’re also talking about the longest running short track in America. I mean, the Pettys used to race at Bowman Gray. I figured that was a pretty rich history rooted there.”

When he first contacted racetrack officials late in 2007 to gauge their interest in a reality show, he was met with skepticism.

“The track and the drivers didn’t want to be portrayed with the negative spin that is in a lot of reality TV,” Kahler remembers. “But once they found out that wasn’t my intention, I was able to gain their trust and get most everyone on board.”

Kahler shot a demo reel at the track in June 2008 and pitched it to a dozen entertainment entities. Triage Entertainment, makers of the Food Network’s renowned “Iron Chef” and a host of History Channel programs, ordered 13 episodes, and Kahler went to work.

“I’m obviously comfortable with shooting film,” says Kahler, whose newest documentary “American Harmony,” which opened in January, brings barber shop quartets to the big screen. “But I was so unfamiliar with the world we were walking into.”

Using 30 Winston-Salem-area employees for his crew of 50, he began shooting episodes in April 2009. Three teams of two cameras handled the every-day reality lives of the drivers during the week, while 33 cameras, mounted on cars and around the track, were on hand each Saturday to secure the racing action.

“We were left with 2,000 hours of footage to select and edit,” Kahler says. “My real duty is creating each of the story arcs for each episode. You have to take the personal lives and the track lives and put them together for an episode that stands alone.”

Serving as creator and executive producer, Kahler is presenting “Madhouse” in hour-long packages, each leaving a hook that, he hopes, will interest viewers enough to tune in the following Sunday, and beyond.

“Thirteen episodes are guaranteed,” he says. “I figure after the first four or five air, we should know if there’s a second season. If not, then it’s on to the next project. This is what I do, and I love what I’m doing.”