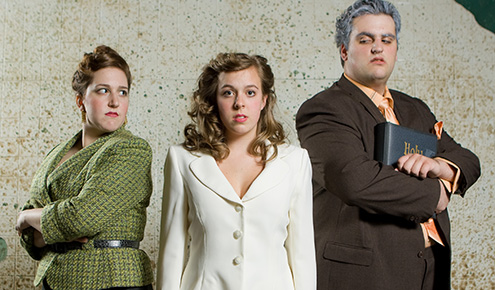 “The Threepenny Opera,” written in Germany over 80 years ago, has a lot to say about unscrupulous behavior in any era. This operetta of power and corruption, written by poet and playwright Bertolt Brecht, proves the world is only one scoundrel away from the next $65 billion Bernie Madoff-style Ponzi scheme.

“It was difficult coming to terms with my character,” says Tony DeMartino, a senior from Lanoka Harbor, N.J., who plays Jonathan Jeremiah Peachum, a main character who trains beggars for a portion of their spoils. “I learned to sell the image of Peachum by reproducing facial expressions and gestures from people in the news today — people who make their living trying to influence and manipulate others through words and actions.”

DeMartino, who is double-majoring in chemistry and German, says his German background helped with lyric pronunciation, but he says during rehearsals it could get confusing whether to start singing in English or German. Translations in German will appear above the stage.

The play will have audiences questioning social institutions, DeMartino says. “Not much has changed in modern industrialized history,” he says. “The play is real-life applicable.”

Sophomore Jacob Eichhorn from Greensboro, N.C., is one of seven musicians playing 21 different instruments on stage. Eichhorn plays the clarinet, and soprano, alto, tenor and baritone saxophones during the two and a half hour production. “The switching from instrument to instrument is the biggest challenge. Some songs only allow three beats to make the switch between instruments. It’s also an endurance test.”

The play is directed by Director of Theatre John Friedenberg. David Hagy, director of orchestra, leads the musicians. Professor of Music Teresa Radomski is the voice coach.