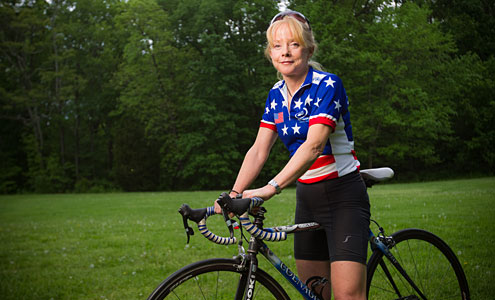 Despite numerous run-ins with cars over the years, Pat Roberts still has a passion for running and cycling. Now that she’s retired from the School of Law, she may be trading her road bike for a mountain bike and heading to the wilds of Southern Utah to explore the sandstone and red-rock desert where her daughter gives guided mountain bike tours.

“I will miss my students,” she said. “The feeling that I have successfully explained a difficult concept is extremely rewarding.”

In 1987, Roberts set the North Carolina state record for Masters in the 10-miler and was voted N.C. Female Masters Runner of the Year by the N.C. Road Runners Association. Later she became a cyclist and finished third in her age division at the Worlds Masters Race in Austria in 2002. She is a 10-time National Champion in her age division.

An Ohio native, Roberts moved to Winston-Salem in 1977 from Columbus, Ohio, with her then-husband Tom Roberts, who was hired to teach at the law school and is also retiring this summer. The Robertses were close friends with the now-retired David Shores and his wife. David and Tom worked together at the same law firm in Ohio.

Hired initially as an adjunct when her children were small, Pat Roberts soon became a part-time and later a tenured professor. She is a well-respected teacher and scholar in the subjects of Property, Decedents’ Estates, and Trusts and Donative Transfers. She is a co-author of a casebook on Decedents Estates and Trusts, which is in its seventh edition.

“I think the most important skill that I taught was the ability to recognize and avoid drafting ambiguous language,” she said. “Often language seems unambiguous, but when applied to particular facts, usually involving an unexpected order of deaths, the drafting gives rise to litigation because of the ambiguity. The end result can leave an otherwise harmonious family torn apart. This is one of the worst things a lawyer can do.”

She is a longtime member of the law school’s admissions committee and has been involved in preparing students for the bar examination. In 2000, she was elected to become a member of the American College of Trusts and Estates Counsel.