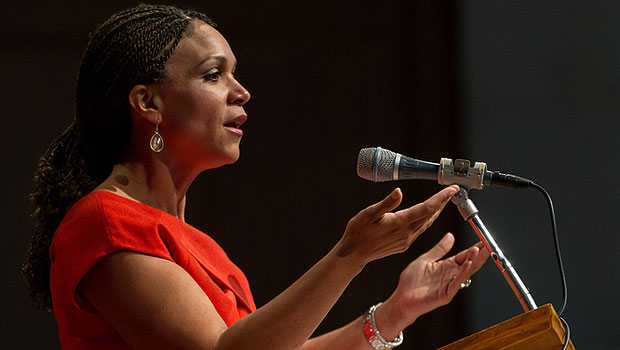 Melissa Harris-Perry, host of her own MSNBC show and a 1994 Wake Forest graduate, encouraged students to ask, “What difference does that make?” in her address “Only Youthful Folly Can Make Democracy Real” on Sept. 10 in Wait Chapel.

“This question, and asking this of yourselves and of your political process, is the consistent gift that we give to democracy,” Harris-Perry said.

First-year students and their academic advisors attended the event as the culmination of the summer academic project focused on civic engagement among young voters.

Earlier in the day, Harris-Perry met informally with students and was a guest speaker in two politics classes. She also signed copies of her new book, “Sister Citizen: Shame, Stereotypes, and Black Women in America” in the atrium of Z. Smith Reynolds library.

Harris-Perry is a professor of political science at Tulane University, where she is founding director of the Anna Julia Cooper Project on Gender, Race, and Politics in the South. She was also on the faculty at the University of Chicago and Princeton University.