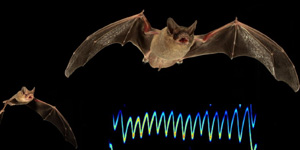 In their nightly forays, bats hunting for insects compete with as many as one million hungry roost-mates. A study published today in Science shows that Mexican free-tailed bats jam the sonar of competitors to gain advantage in aerial foraging contests.

Bats use echolocation, or biological sonar, to find and track insect prey in complete darkness. When a bat hears a competitor going in for the kill, it makes a specialized jamming call to prevent its competitor from making the catch. The bats often take turns jamming each other until one of them gives up.

The research was conducted by Aaron Corcoran, University of Maryland, and William Conner, professor of biology at Wake Forest University. Its primary sponsor is the National Science Foundation.

“This is the first study to show that bats actively jam the echolocation of other bats, and it increases the number of known functions of bat sounds to three: echolocation, communication, and acoustic interference,” Corcoran said.

To demonstrate jamming, the biologists had to rule out other possible functions of the call – for example, that the bats were simply communicating with each other.

The research was conducted at the Southwestern Research Station in Arizona and in a high school parking lot in Animas, New Mexico. The biologists recorded natural bat competitions with highly-sensitive cameras and a specialized array of ultrasonic microphones that allowed them to reconstruct the flight paths of the bats from their emitted sounds. The researchers saw that the bats almost always missed their prey when another bat was jamming them.

In a second experiment, the researchers lured wild bats into trying to capture moths suspended from an ultra-thin fishing line while they played different ultrasonic sounds from a speaker. The jamming call only caused the bats to miss the prey when it was played at precisely the right time and frequency.

Sonar interference has only been observed in Mexican free-tailed bats, said Conner.  “It isn’t known if other bat species – or other echolocating animals like dolphins – are employing the same tactic.”

“This research changes our understanding of the possible ways animals compete with each other for food, which is one of the most basic biological needs,” concluded Corcoran.