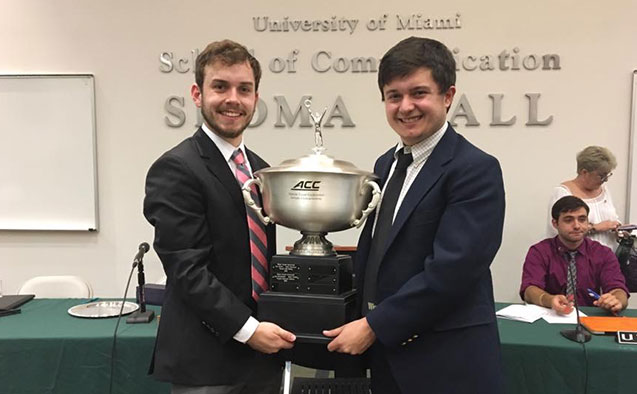 The Wake Forest debate team claimed its third-straight ACC Debate Championship Sunday. The event was held at the University of Miami April 1-2.

Wake Forest debaters, sophomore Adam Tomasi and junior Brent Mitchell, were undefeated, winning over the University of Miami in the final round of the championship. Mitchell finished as the ACC’s top overall speaker, while Tomasi, a back-to-back ACC Champion, finished second.

The final round can be viewed here.

The topic for the debate was “Resolved: The United States Electoral College should be abolished.”

“This incredible accomplishment reflects the hard work of our debaters and coaches,” said Jarrod Atchison, associate professor of communication and director of the debate program. “It would not have been possible without the support of the University and our guest coaches.”