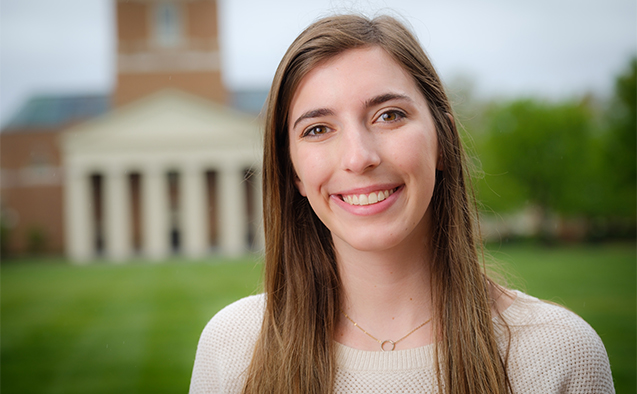 The Pulitzer Center on Crisis Reporting has awarded a fellowship to Wake Forest University junior Kiley Price. The $3,000 grant will enable her to travel to Thailand in May to research the role and impact of activist Buddhists in the Thai environmental movement, which seeks to strike a better balance between the country’s economic growth and the water pollution, air pollution and deforestation that go along with it.

Price, a biology major with a minor in journalism from Philadelphia, Pa., will investigate how Buddhist monks have used interpretation of religious literature and ritual to add meaning behind the environmental movement. While reporting, Price will scrutinize potential hypocrisy and corruption in the Thai Buddhist community with regards to the environment.

“There are two interesting sides to the Buddhist faith and the Thai environmental movement: on one hand, they are very involved with nature and use Buddhism to boost the environmental movement,” said Price. “They have this practice of tree ordination where they ordain trees as monks. On the other hand, some Buddhist have been known to be involved with contributing to the illegal ivory trade.”

Justin Catanoso, professor of journalism at Wake Forest, believes that Price is ideally positioned to pursue this story because she is pursuing a science-based project, with a journalistic outcome.

“This reporting is timely because we are constantly in a bind with our global environment. This is the kind of story that can make a difference.” Justin Catanoso, professor of journalism

“People have this perception of Buddhism as being happy, conscientious and pleasant, but within Buddhism lies tension because they are also involved with the illegal ivory trade,” said Catanoso.

When Price returns from her reporting in Thailand, she will continue with a 10-week internship at World Wildlife Fund in D.C.

The journalism program at Wake Forest is a member of the Pulitzer Center’s Campus Consortium, which brings foreign correspondents to campus and provides funding for the fellowships. This is the University’s eighth fellowship recipient.