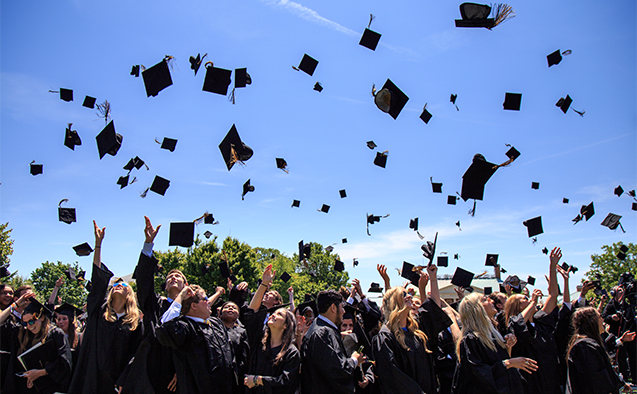 Frederick J. Ryan Jr., publisher and chief executive officer of The Washington Post, will deliver Wake Forest University’s commencement address on Monday, May 20. The ceremony will begin at 9 a.m. on Hearn Plaza.

A livestream webcast of the commencement ceremony will be available at go.wfu.edu/2019grad.

Also joining Wake Forest for the commencement weekend will be baccalaureate speaker Gary Haugen, CEO and founder of International Justice Mission (IJM).The Baccalaureate service will be held Sunday, May 19, at 9 a.m. in Wait Chapel.

A livestream webcast of baccalaureate will be available at go.wfu.edu/bacc19.

Commencement and baccalaureate are not open to the public.

More details on commencement and baccalaureate speakers are available here.

Kayla Amador: Since kindergarten, Kayla wanted to be an artist. But when the time came to choose a college, she decided to pursue a broader liberal arts education at Wake Forest rather than attend an art school. A double major in studio art and Japanese language and culture, Kayla was one of only six students who participated in an art acquisition trip to New York where students are given funds to purchase works for the University’s collection. She has accepted a position as manager of the START gallery in Reynolda Village.

Kyle Flaherty: As a first generation college student, Kyle sought every support available at Wake Forest, then shared what he learned about how to succeed with his friends. Graduating with a major in computer science, he has accepted a job with Capital One working in cyber security. Kyle is committed to helping students in lower income public school systems gain access to resources in the STEM fields. “There were no computer science classes in my high school, so I was at a disadvantage in my first class at Wake Forest when compared to my peers. I want to help change this for others.”

Addie Folk: Addie is a 6th generation Wake Forest graduate on her father’s side of the family and a 3rd generation on her mother’s. “I was against coming to Wake Forest because I did not want my family to force me to live the same experiences they had, and I wanted to have my own college experience. But once I toured the campus, I was sold that Wake was where I was meant to be.” Addie majored in religion and completed a minor in dance.

Quentavious “Q” Revis: Q is a first-generation Magnolia Scholar from a small town in Eastern N.C. He is receiving a degree in accountancy and has accepted a job at PwC, which will begin after he completes his fifth year master’s degree in accountancy at Wake Forest in 2020. In addition to majoring in accounting, Q has been an RA, a President’s Aide and a volunteer in several organizations.

Frida Isla Valdez: A sociology major with a concentration in business, Frida has accepted a consulting position with EY in People Advising Services. Though she will be based in Charlotte, Frida will travel around the state meeting with clients. A self-described people person, Frida accepted internships each summer during her college years and studied in D.C. with Wake Forest’s Wake Washington program. Along with her sociology major, Frida completed minors in politics and international affairs and Latin American & Latino studies.