The Magnolia Scholars anniversary celebration coincides with First-Generation College Day, started in 2017 by the National Association of Student Personnel Administrators (NASPA.) First-generation students are those whose parents did not graduate from a four-year college or university. 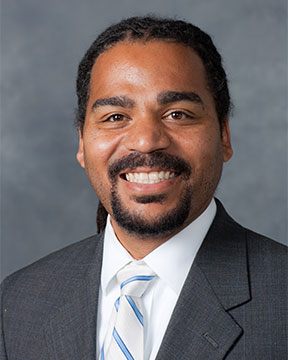 Magnolia Scholars Program Director Nate French said many of the more than 200 former Magnolia Scholars who have already graduated are now successful in fields ranging from medicine to education to journalism, while current scholars have promising futures.

Wake Forest Magnolia Scholars alumni have gone to law school, medical school and dental school or enrolled in graduate programs. Some work with national accounting and consulting firms, while others have landed important jobs with non-profit organizations or started their own businesses.

Magnolia Scholars have come to Wake Forest from small towns and ended up working in Los Angeles or other big cities. Bryson Rominger (‘14) went on to dental school, returned to his Caldwell County hometown after graduating and now runs the county’s only dental practice. 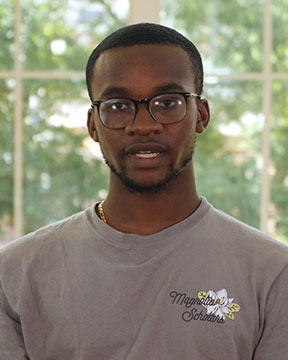 Current Magnolia Scholar Stevenson Cerisier (‘22) is one of five children born to Haitian parents. “My parents had to work really hard to support us,” he said.

Because of the Magnolia Scholars program, Cerisier is considering an interdisciplinary major in global health in hopes of addressing health disparities throughout the world. “I want to help underdeveloped countries receive healthcare, and working in Haiti is definitely a possibility.”

Cerisier has never traveled outside the U.S. but is already lined up for a two-week study abroad program in Cambodia next May.

“Now that I’m in Magnolia Scholars, I’m open to more opportunities to really connect with people who can put me in a position to do things like this.” Stevenson Cerisier ('22)

French said students like Cerisier are encouraged to take advantage of everything Wake Forest offers, including internships, study abroad, and local and international service programs. During their first year, the Magnolia Scholars meet weekly in a First Year Experience class taught by French. The program goes beyond a traditional scholarship to provide community, accountability and targeted mentoring. Selected students have strong academic preparation and are highly motivated. 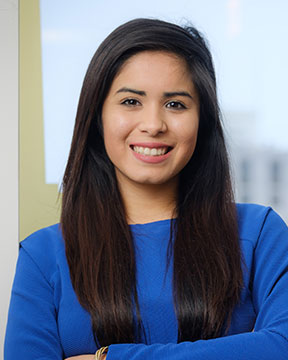 Current Magnolia Scholars herald the program, saying it helps them feel included and gives them confidence to know they can succeed at Wake Forest and beyond.

Jocelyn Segura, a senior politics and international affairs major from Houston, learned about Wake Washington – the University’s study away program in D.C.- through the Magnolia Scholars program. “I was able to learn more about myself and the issues I’m passionate about by attending Wake Washington,” she said.

“At Wake, I have met people from backgrounds that are not at all like my own…and have been able to understand just how similar and different our lives are.” Jocelyn Segura ('20) 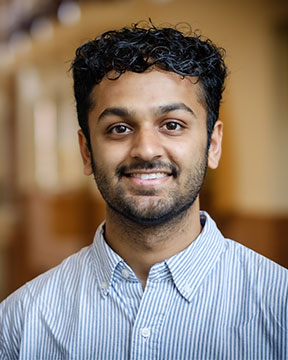 “Most of my Wake Forest experience could not have been possible without Dr. French and this program,” said Malik, who aspires to become a primary care physician and work with underserved, rural communities. “I’ve been able to study abroad in London and Morocco, which was life-changing.”

The Magnolia Scholars program was established in 2009 with a gift from Dr. Steven and Becky Scott. Four years later, the Scotts committed another $6.5 million to the program.

Many Magnolia Scholars are from North Carolina; however, members of the current group are from all over the country and come from urban and rural backgrounds, range in ethnicity and religious affiliation and are represented in every major on campus.

“One of the things that makes the Magnolia Scholars program distinct is our institutional placement in the Office of the Dean of the College, which allows us to have access to student grades,” French said. “We have a direct line of engagement with faculty and academic programs.”

Last fall, the Magnolia Scholars program received an anonymous $10 million endowed gift, which provided an additional $4,000 annual award to each of the University’s 120 scholars and for those to follow in perpetuity. The funds will substantially reduce or eliminate the amount of the students’ need-based debt – which varies, based on family needs – by supplementing other scholarships and grants these scholars may receive.

French was working at another university when he learned of the opportunity to lead Magnolia Scholars. He applied, in large part, because he fully understands the need to support first-generation students.

He earned his undergraduate degree from Wake Forest (‘93) before earning his master’s and Ph.D. degrees from UNC Chapel Hill. He wasn’t a first-generation student but knows firsthand how it feels to be on the margins of an institution. Some Magnolia Scholars, particularly those of color, say the fact that he’s a Wake Forest alum helps them relate well to him.

French brings passion to the Magnolia Scholars program. Whether in the FYE Class or during informal gatherings, he gives it to the students straight, telling them what they need to know versus what they want to hear.

“I know that I can go talk to Dr. French whenever I need to and his door is always open. His leadership is something I hope to embody one day. His dedication towards our success is admirable.” Mohammad Malik ('20)

Tyler Primm Miller, a Magnolia scholar and senior history and philosophy major from Davidson County, said “Dr. French’s willingness to help scholars and his detailed knowledge are invaluable. “He is by far one of the best people on this campus. He’s always willing to help and listen, and he knows everyone.”

French said there’s no question about the necessity of programs like Magnolia Scholars or about their profound impact. Many of Wake Forest’s Magnolia Scholars readily acknowledge they would not have been able to attend the University without it.

Segura said her friends who are first-generation students and attend other institutions say they don’t receive nearly as much structured support as she does through Magnolia Scholars. That Wake Forest’s program is applauded by students at other institutions isn’t surprising to Deana Waintraub Stafford, assistant director with the Center for First-generation Student Success, a NASPA initiative.

“Through building community and a sense of belonging, from pre-orientation programs all the way through graduation ceremonies, Magnolia Scholars creates an environment where first-generation students thrive,” Waintraub Stafford said.