On Veterans Day, Nov. 11, Sen. Richard Burr (R-NC) and Sen. Mark Warner (D-VA) offered a rare behind-the-scenes look at how the work gets done on Capitol Hill. The two engaged in a conversation at Wake Forest moderated by Kami Chavis, Professor of Law and director of the University’s Criminal Justice Program. 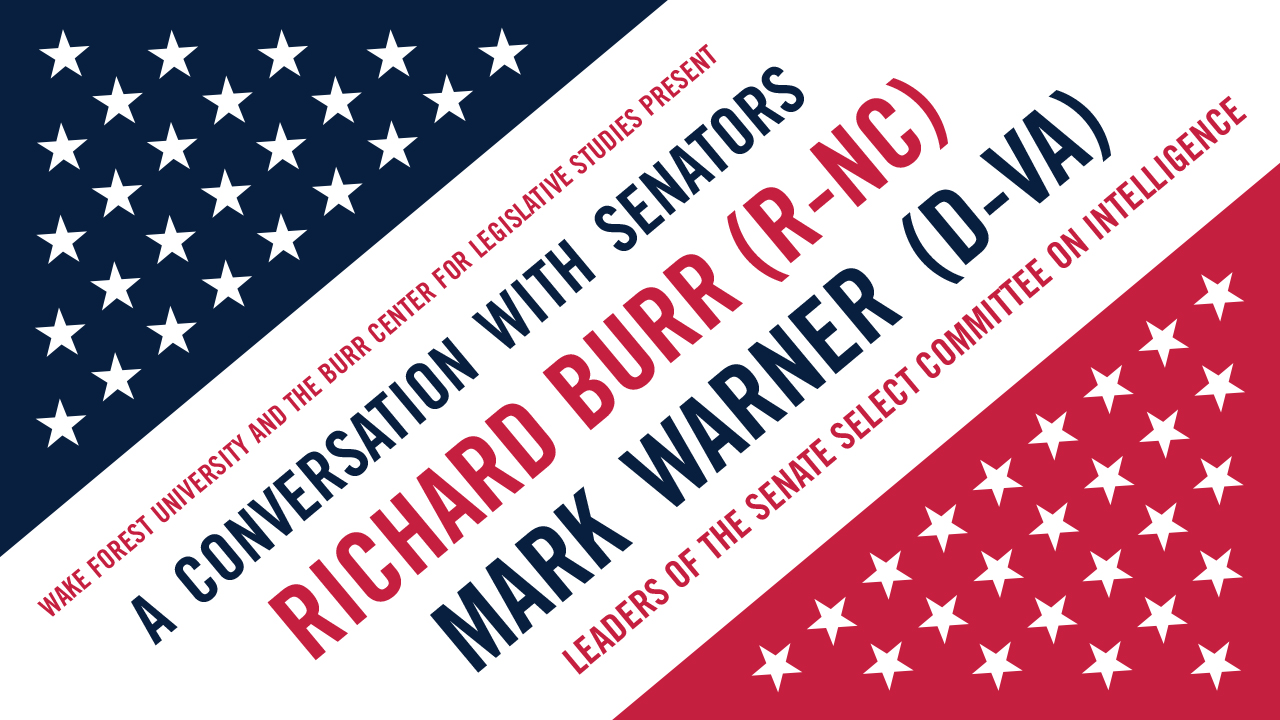 During the hour-long discussion, the senators touched on the Russia investigation, election interference, cyber threats and impeachment. The two highlighted how leaders from opposite sides of the aisle are able to work together on issues of national importance.

“The reality is we all have to pick where we would like to make an impact,” said Burr. “We can’t do it if we don’t trust each other. We don’t agree on everything, and when we don’t agree we get together and we hammer that out.”

Burr said he finds senators across party lines who both share his passion for particular issues and are willing to bend rather than break to get legislation passed.

“I really appreciated both senators’ willingness to compromise to see a bill pass, recognizing that achieving 80% of what you want is better than 0% and that 100% is not attainable,” said politics major Ellie Bruggen (’20).

The event offered students as well as the community a chance to hear about issues facing the country.

“Past generations have usually had one or two big problems to deal with at a time,” said senior politics and international affairs major Walter Jackson. “My generation, however, has three or four big problems: climate change, automation and artificial intelligence to name a few.”

“Working together with those we disagree with will be a necessity if we are to address these challenges.” Walter Jackson (’20)

During the talk, Chavis referenced a recent Gallup poll indicating American’s approval of Congress is at 20%.

“Many people in Congress can tell you what they have been against most of their life, but rarely what they are for. Unless and until we all start to hire people who are willing to get to yes –even if that yes is not ideologically perfect – we are going to continue to have those rates. And my fear is, if we don’t show again that we can get to yes, then millennials and other people will tune out.

Burr and Warner’s individual records demonstrate their ability to work across the aisle, Chavis said. “The senators exemplified the collegiality and civility that so often seems lacking in our political discourse today,” she added.

In addition to the evening conversation, Burr met with a group of students participating in the University’s Leadership and Character Project.

In 2018, Burr (‘78) announced that he will donate his Congressional papers to Wake Forest University. The papers will be curated by the Special Collections & Archives department at the Z. Smith Reynolds Library. The collection includes photographs, sound and video recordings, manuscripts, letters, speeches, handwritten notes and other documents from more than two decades of Burr’s service in the U.S. House of Representatives and the U.S. Senate. The conversation was the inaugural event presented by the Richard Burr Center for Legislative Studies. It was free and open to the public.