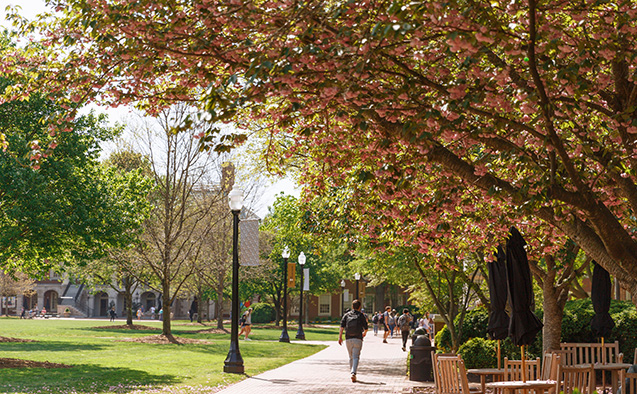 Members of the Wake Forest community gathered at the steps of Wait Chapel to commemorate the enslaved individuals who worked for or were sold to benefit the institution that would become Wake Forest University. During the event, faculty, students and alumni read the names of those enslaved individuals aloud. Sixty-two bell tolls rang from Wait Chapel for the 61 names read and one for those whose names remain unknown. – 4/27/2022

College presidents holding pandemic-delayed inaugurations
By David Steele | Inside Higher Ed
“I think inaugurations and installations are part of the culture of a university in terms of a shared governance,” said President Susan Wente. “It’s where a president’s values and priorities are shared in a significant way and to significant number of people. There are very few things that bring all these people together, all those stakeholders, and it’s important to impart the vision and the values you’re sharing with them. It was very special to me. I felt the warmth and the welcome from the Wake Forest community.” – 4/27/2022

How to think about masking on planes, trains, and buses right now
By Rachel Miller | Vox
“They’re a minimum necessary requirement in order to keep our society functioning and allow people to get around in automobiles,” biostatistician Lucy D’Agostino McGowan said. “And then there are things you can layer on top of it, that will help your individual risk — both in terms of keeping you safe and keeping the people around you safe.” It would be helpful for everyone if people thought of Covid-19 measures in a similar way and treated masks like something worth doing even if no one is forcing you to. – 4/22/2022

U.S. turns the screws on Solomon Islands to counter China
By Phelim Kine | Politico
“There’s a domestic aspect to this story…where you have the opposition leader and the incumbent leader play the China card so that they can get attention and have investments come to them from other places,” said politics professor Lina Benabdalla. – 4/28/2022

The doctor who is trying to bring back surprise billing
By Bob Herman | STAT
“It is an extreme legal position that really has no support in current law,” said Mark Hall, director of the Health Law and Policy Program at Wake Forest. “In effect, the argument is, ‘The government can’t tell me how to conduct my business.’ Well, sorry, but the government can.” – 4/27/2022

Walmart, Harris Teeter top Raleigh’s grocery wars, but Wegmans is rising
Axios
The Triangle’s surging population has made it one of the more competitive grocery markets in the country, Roger Beahm, director of Wake Forest University’s Retail Learning Labs, tells Axios. “Wegmans has had a really strong performance, especially when you divide their sales dollars by the number of stores. They are the second leading retailer on a per-store basis, second only to Costco.” – 4/25/2022

Nurturing future talent for climate action: Resetting character-education in institutions of higher learning
BusinessToday Malaysia
The Oxford Global Leadership Initiative, the Program for Leadership and Character at Wake Forest University and the Oxford Character Project are some recent initiatives that set the pace for character education. – 4/29/2022

How are you reacting to findings of racism in the Minneapolis Police Department?
MPR News
Law professor Kami Chavis participated in this discussion on reactions to the two-year investigation that was launched in June 2020 after the murder of George Floyd and conducted by the Minnesota Department of Human Rights. Panelists also discussed possible next steps. – 4/29/2022

Mary Tribble dives into an ancestor’s story and finds hints of the modern South
By Tommy Tomlinson | WFAE-FM (Charlotte, NC)
Mary Tribble, senior advisor for engagement strategies at Wake Forest, is interviewed about her new book. In writing Pious Ambitions, Tribble learned a lot about her great-great-great-great-grandmother, Sally Wait, — some good, some bad. And she also found a lot of parallels between the South of nearly 200 years ago and the South of today. What she found was both a window and a mirror. – 4/27/2022

Former tobacco plant emerges as poster child for Triad infrastructure attractiveness
By Richard Craver | Winston-Salem Journal
The nonprofit Whitaker Park Development Authority was created by Winston-Salem Business Inc., the Winston-Salem Alliance and Wake Forest University for the sole purpose of shocking a heartbeat back into the Whitaker Park campus after Reynolds American Inc. pledged in 2015 to donate the 1.7 million square feet of space. – 5/01/2022

Sophomore Natasha Heisenberg wins Pulitzer Center Fellowship
By Cheryl V. Walker | Wake Forest News
The Pulitzer Center on Crisis Reporting has awarded a fellowship to Wake Forest University sophomore Natasha Heisenberg. The $3,000 award will support reporting on the environmental impact of whaling in the Faroe Islands, a self-governing region off the coast of Denmark. “Whaling takes place in the summer and has been a component of Faroese culture for over a thousand years,” Heisenberg wrote in her application for the program. – 4/27/2022