Corey D. B. Walker named interim Dean of the School of Divinity 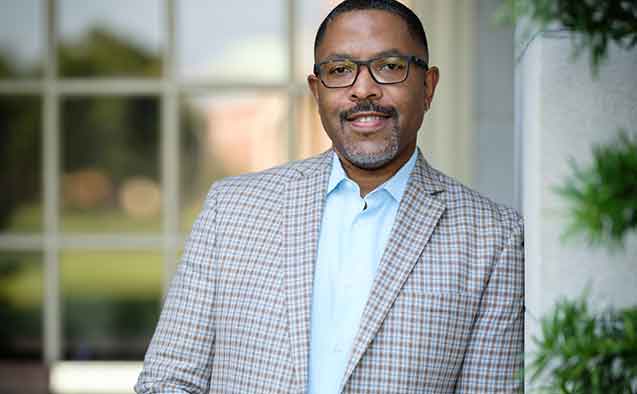 “Corey Walker is an exceptional leader and scholar with extensive experience in theological education who will carry forward the Divinity School’s mission as interim dean,” said President Susan R. Wente. “I am confident he will provide thoughtful leadership during this time of transition and position us to strategically envision how we build for the future.”

On Oct. 14, Jonathan Lee Walton, current Dean of the School of Divinity, was named the eighth president of Princeton Theological Seminary.

“Professor Walker teaches students to be critical thinkers dedicated to a more humane and just future,” said Provost Michele Gillespie. “His keen intellectual energy guides every leadership role he takes on, most recently as vice chair of the Core Planning Team for the University’s strategic framework process. This School of Divinity interim role seems especially suited to his impressive talents.”

Walker joined the Wake Forest faculty in 2020 and established the University’s African American Studies Program. He is jointly appointed in the department of English and the Interdisciplinary Humanities Program.

“I am deeply honored to serve the School of Divinity and Wake Forest University in this capacity,” Walker said. “In a challenging moment in our nation and world, the School of Divinity is uniquely positioned to draw on its rich intellectual and spiritual resources to faithfully live out our university motto Pro Humanitate. I welcome the opportunity to be a part of this extraordinary community in this righteous endeavor.”

Prior to arriving at Wake Forest, Walker held several faculty and academic leadership positions at several universities. At Virginia Union University, Walker served as vice president, dean of the Samuel DeWitt Proctor School of Theology, and professor of religion and society. Previously, he was the inaugural John W. and Anna Hodgin Hanes Professor of the Humanities and served as Dean of the College at Winston-Salem State University. Earlier in his career, he served as a faculty member in theology, ethics, and culture in the department of Religious Studies and in African American studies in the Carter G. Woodson Institute of African-American and African Studies at the University of Virginia. He also held a faculty appointment at Brown University, where he served as chair of the Africana Studies department and has had visiting faculty appointments at Friedrich-Schiller Universität Jena, Union Presbyterian Seminary, and University of Richmond.

Walker is the author of A Noble Fight: African American Freemasonry and the Struggle for Democracy in America (University of Illinois Press) and is completing Disciple of Nonviolence: Wyatt Tee Walker and the Struggle for Democracy in America to be published by the University of Virginia Press. He is also the editor of Community Wealth Building and the Reconstruction of American Democracy: Can We Make American Democracy Work? (Edward Elgar Publishing), editor of African Americans and Religious Freedom: New Perspectives for Congregations and Communities (Freedom Forum), editor of African American Religion for Bloomsbury Religion in North America (Bloomsbury), editor of To Stand With and For Humanity: Essays from the Wake Forest University Slavery, Race and Memory Project (Wake Forest University), editor of the special issue of the journal Political Theology on “Theology and Democratic Futures,” and associate editor of the award-winning SAGE Encyclopedia of Identity.

He has published more than 60 articles, essays, book chapters and reviews appearing in a wide range of scholarly journals and publications. He also co-directed and co-produced the documentary film fifeville with acclaimed artist and filmmaker Kevin Jerome Everson.

Walker was a consultant with the In Trust Center for Theological School. He served as founding president of the Center for Faith, Justice and Reconciliation and was Senior Fellow for Religious Freedom at the Freedom Forum Institute. He was also a member of the United States Institute of Peace U.S. International Religious Freedom Policy: Finding Common Ground to Advance Peace and Stability working group.

Walker is a graduate of Norfolk State University where he earned his bachelor’s degree in finance. After a career in the financial services industry, he went on to earn his master of divinity degree from the Samuel DeWitt Proctor School of Theology of Virginia Union University, master of theological studies degree from Harvard University, and doctor of philosophy degree in American studies from The College of William & Mary.