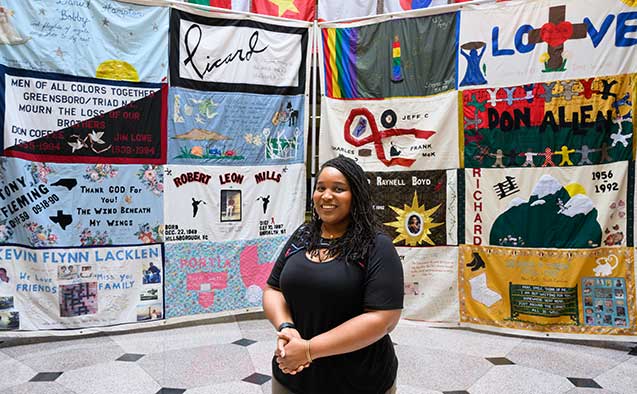 The Wake Forest University LGBTQ + Center and the National AIDS Memorial are partnering together to bring five panels of the AIDS Memorial Quilt to Winston-Salem.

The panels will be on display at Wake Forest in the Benson Center Rotunda (3rd floor entryway) from Jan. 16 – Jan. 20.

The Quilt’s history goes back to 1987 during the AIDS pandemic when it was first unveiled on the National Mall in Washington D.C. Today, it has more than 50,000 panels with more than 110,000 names stitched into its fabric. The tapestry weighs 54-tons and is considered the largest piece of community art in the world.

“As someone who has lost a loved one to complications due to AIDS, the Quilt immediately came to my mind as a visual example of resilience and activism, of uplifting voices that are often unheard,” said Nayasia Coleman, assistant director of the LGBTQ + Center at Wake Forest University.

Community members can also see the Quilt panels during an event in Wait Chapel on Jan. 16. They will serve as the backdrop for the first LGBTQ+ identified MLK Day keynote speaker ever brought to Wake Forest: legendary U.S. Goalkeeper, two-time Olympic Gold Medalist, and World Cup Champion, Briana Scurry.

Coleman said the panels will have ties to North Carolina including the Triad. The exhibit is open to the public, with any donations received supporting the mission and work of the LGBTQ + Center.

“The Quilt sections on display connect the story of AIDS directly to the work we do to provide services, educate and raise greater awareness about HIV today,” said Coleman. “The Quilt offers important reflection about the tremendous loss of life, allowing us to remember those we’ve lost, ensure their lives are never forgotten and provide hope for the future.”

During Black history month, Wake Forest will work with other institutions in the region, including North Carolina A&T State University to host panel making workshops. Coleman said the goal is to have those pieces included in the National AIDS Memorial Quilt.

The public can view the panels in Wake Forest University’s Benson Center during the following times: