The event is free and open to the public and along with election coverage will feature live music, food trucks and giveaways.

Since January, a group of students has traveled a long and winding political road with stops in Iowa, New Hampshire, South Carolina, New York, D.C., Cleveland and Philadelphia. The goal: experience democracy on the front lines and become more engaged citizens.

They are part of Wake the Vote, a year-long, bipartisan program mixing classroom discussion with real-world political experience.

“We’ve gone across the country. We’ve gone to different town halls, heard speeches and attended amazing debates. We’ve seen all these great things that are part of the American political culture, and we’ve really gotten to engage in a way that I think most young people don’t,” said sophomore Zachary Bynum, who, as part of the Wake the Vote group, has discovered his passion for grassroots organizing and digital democracy.

The students have been to Clinton rallies and to Trump rallies. So, regardless of who is elected on Nov. 8, they will have attended an event with the next U.S. President.

“Wake the Vote has brought people together who have different opinions – to cultivate conversation, to talk about difficult issues, to be involved in the political process and to be civically engaged as college students.” Hannah Dobie, senior politics and international affairs major

Along the campaign trail, students learned about key election issues and saw the American political process in action. The group collected buttons and signs from Marco Rubio, Bernie Sanders, Ben Carson, John Kasich, Chris Christie and Jeb Bush campaign headquarters – names no one will see on the presidential ballot on Election Day.

Newt Gingrich and Chelsea Clinton both tweeted at the group using the hashtag #WaketheVote.

In efforts to engage fellow students and the community in this year’s election, the students created the Wake the Vote Election Hub. The group has hosted debate watches, as well as lectures and panel discussions featuring diverse political perspectives on key election issues.

More on Wake the Vote 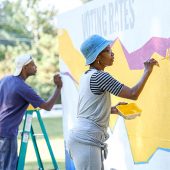 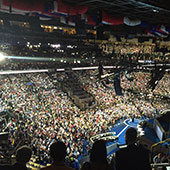 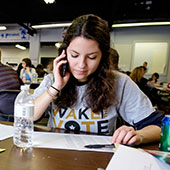 Wake the Vote: When 22 Wake Forest University students traveled to the Iowa caucuses to work with presidential campaigns, they embarked upon a yearlong journey to combine classroom and real-world political experience through a program called Wake the Vote. 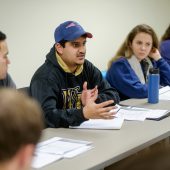 At a time when polarization drives many Americans away from politics and voter turnout among 18 to 29-year-olds hovers around 20 percent, a Wake Forest study shows that learning to talk about controversial issues while in college can inspire young adults to be more engaged citizens even 10 years later.