History professor to testify on Capitol Hill about antisemitism 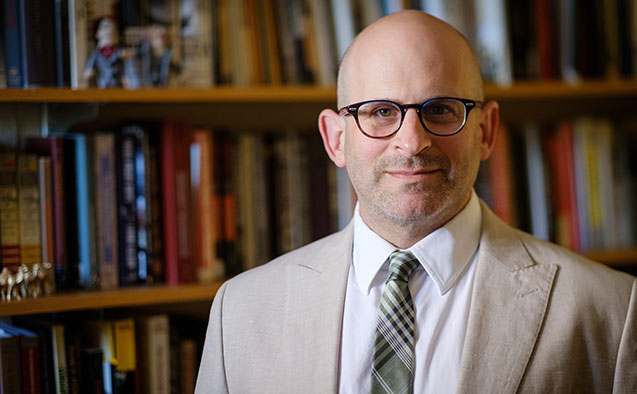 Wake Forest University Professor Barry Trachtenberg, a nationally recognized expert in Jewish history, will testify before the U.S. House Committee on the Judiciary next week.

Trachtenberg is the Rubin Presidential Chair of Jewish History and Director of the Jewish Studies Program. For more than 20 years, his research and teaching have focused on the complexities of and controversies in modern Jewish history, including the Holocaust; Zionism, Israel and Palestine; and modern Yiddish culture.

“I am grateful that Rep. Goodlatte is soliciting a wide range of voices on this important subject because the right of students and faculty to express diverse views freely is precisely what is at stake in current attempts to limit campus speech.” Barry Trachtenberg, Rubin Presidential Chair of Jewish History and Director of the Jewish Studies Program

His testimony will focus on efforts to pass legislation in the previous congressional session that would enact new speech codes concerning antisemitism on college campuses. Trachtenberg is wary of such codes, arguing that “attempts to legislate speech that is perceived as antisemitic, while seemingly well-intentioned, are in fact efforts to suppress campus debates regarding the State of Israel and its supporters. Contrary to their declared goal of protecting Jewish students, such restrictions threaten to exacerbate antisemitism on campus by perpetuating long-standing myths that Jews are an ‘exceptional’ people who require special laws and regulations and risk weakening the academic freedom of students and faculty.”

Read more about Trachtenberg’s “Zionism, Palestine, and Israel in Historic Perspective” class and how he is helping students engage in meaningful discussions across difference.

Trachtenberg’s forthcoming book, “The United States and the Nazi Holocaust: Race, Refuge, and Remembrance” (Feb. 2018), demonstrates that the United States’ response to the rise of Nazism, the refugee crisis it provoked, the Holocaust itself, and its aftermath were — and remain to this day — intricately linked to the ever-shifting racial, economic, and social status of American Jewry. He is also currently writing a book “‘Bible for the New Age’: The Nazi Holocaust and the Exile of Yiddish,” which considers the shifting agenda of Yiddish-language research and the ways that the Nazi Holocaust shaped Jewish historians’ understanding of their task.

“The truth is that antisemitism is still alive in the United States and in many places around the world – just as we saw in Charlottesville this summer, where torch-bearing marchers carried Nazi and Confederate flags, chanted “You/Jews will not replace us,” and murdered a protester – and it requires vigilance and persistent resistance. It is a poor use of our time to distract ourselves by crafting legislation that dictates what can and cannot be said on college campuses regarding the State of Israel.”

Live coverage of the hearing will be available at https://judiciary.house.gov/hearings/.

Wake Forest offers number of resources for members of the Jewish community and those interested in learning more about Judaism on campus. Additional details are available at jewishlife.wfu.edu and highlights include: