Wake Forest University has appointed alumnus and former Environmental Protection Agency (EPA) official Stan Meiburg (’75) as director of graduate programs in sustainability. Meiburg served as Acting Deputy Administrator for the EPA from 2014 to 2017, capping a 39-year career with the agency.

Wake Forest soon will break ground on the Sutton Sports Performance Center and the Basketball Player Development Center thanks to the continued generosity of Ben Sutton (’80, JD ’83, P ’14, P ’16, P ’19). The construction of these two buildings is a $50 million project — all of which has been pledged by athletic donors like Sutton.

Wake Forest University will roll out a new vehicle for alumni engagement this weekend at Homecoming. The Streakin’ Deacon, a 42-foot-long Wake Forest-branded recreational vehicle, will officially kick off a statewide tour when 4,000 people visit campus Oct. 28-29.

Bob McCreary (’61), whose generous philanthropy already distinguishes him as one of Wake Forest University’s greatest benefactors, has committed an additional $15 million to further his unrivaled support of the athletics program.

As she finished Neal’s walk on Monday morning, June did so with a strange mix of joy and sadness but she also remembered her son with every step. 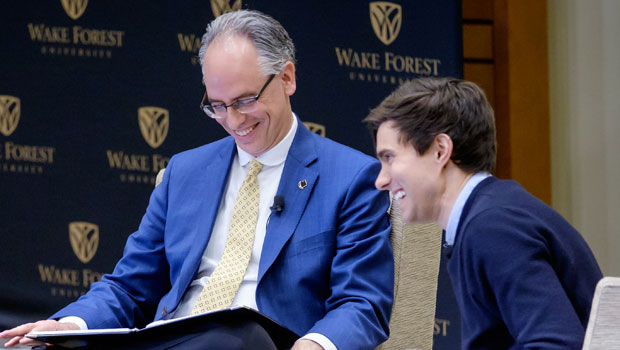 On April 21, the University honored this year’s outstanding entrepreneurs. Ricky Van Veen, who founded CollegeHumor.com during his freshman year at Wake Forest, received the Excellence in Entrepreneurship Award. A faculty member and six students were also recognized.