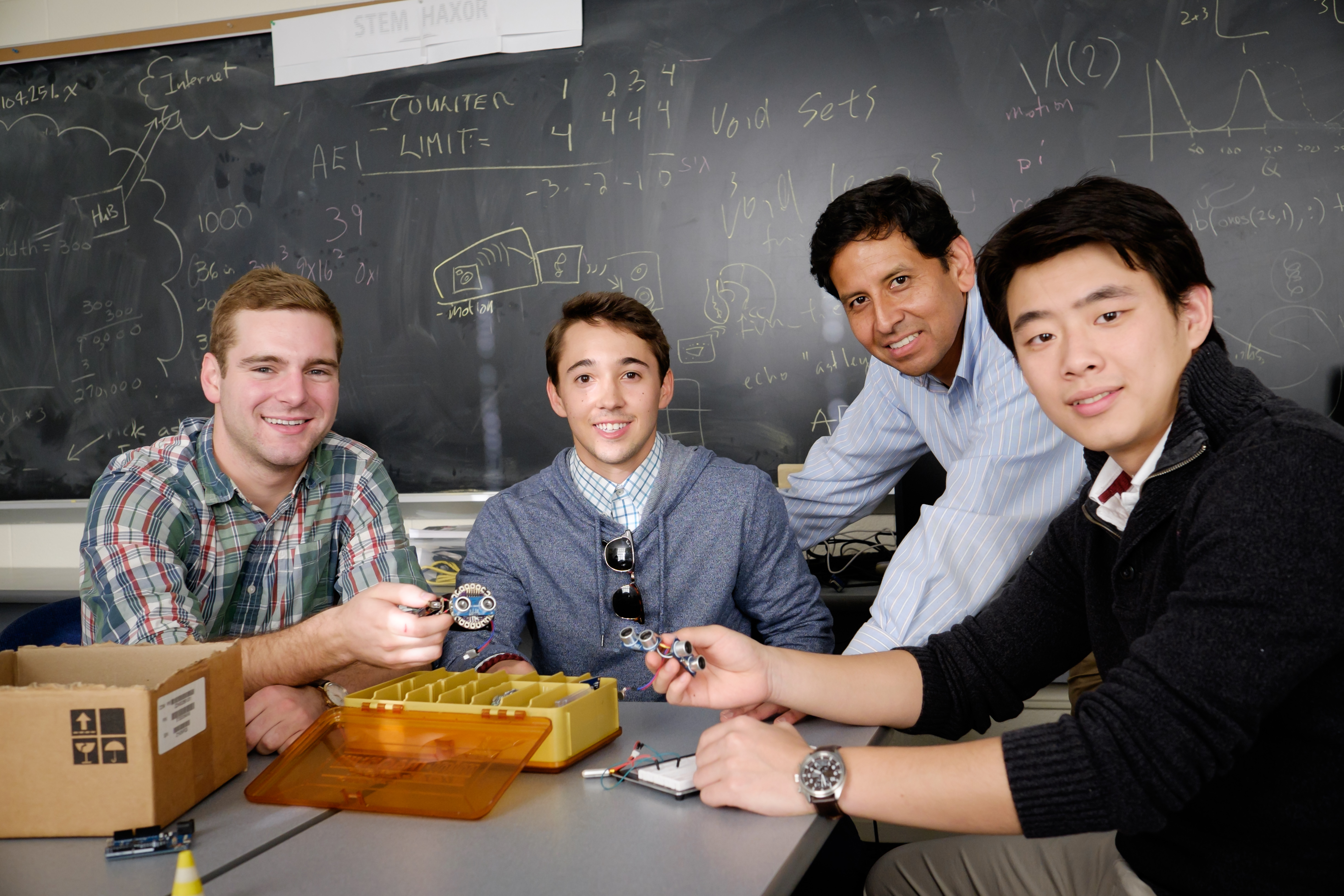 When a biologist who studies bats and a computer scientist cross paths, amazingly cool things can happen.

Cool things such as a sonar device to assist the visually impaired.

The idea came from biology professor William Conner, who for decades has been studying echolocation in bats and moths to learn more about the evolution of animal communication. Conner, who also is the David and Lelia Farr Professor of Innovation, Creativity, and Entrepreneurship, teaches a class called “Bio-inspiration and Biomimetics,” which looks at how animals and plants can inspire the design of new technologies.

He talked with Paul Pauca, an associate professor of computer science, who was immediately interested.

A collaborative project was born.

The pair assembled an interdisciplinary team of students to figure out how to put Conner’s idea into action.

“The sonar device for assisting the visually impaired is a perfect example of how my class works,” Conner said. “We were inspired by bat sonar, we learned about it, and then we used it to develop a new product. The students took the idea and made it happen.” 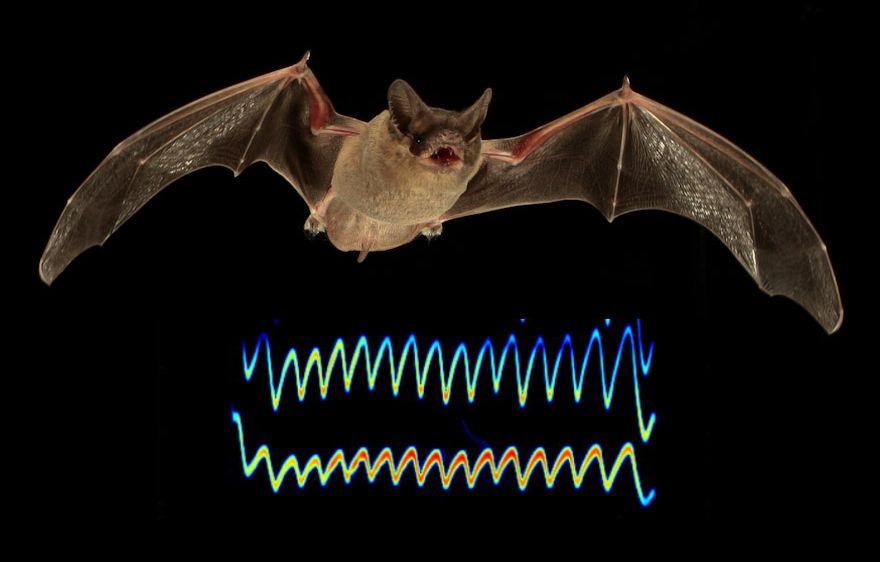 “The vision of the STEM incubator is to pair upperclassmen from possibly different science fields together with undeclared freshman and sophomores,” Pauca said. “One of the goals is to foster horizontal relationships between students, meaning that they are learning from each other, but also vertical relationships with their faculty mentors.”

The student trio didn’t waste any time. They joke that they started by tying strings and duct tape together, but clarified their approach when online research uncovered a sonar distance sensor. “We questioned how we could use this in a creative way to help blind people navigate better,” Janes said. “We each had different ideas.”

They eventually focused on developing a device that could be worn like a watch by a visually-impaired person as a supplement to other aids like a cane or dog.

“We decided on the watch because it’s small,” said Prado, who came up with a clever name for it: HELP, the Human Echo Location Partner. “We all think this a really cool device that could help a lot of people.”

Prado got involved with the project because of his interest in ophthalmology and eyecare. He’s applying to medical schools and approached Conner about doing some research with him.

“He said he had the perfect research task for me and that’s how I got involved,” Prado said. “It’s been out of my comfort zone a little bit, but I’ve had a great team and enjoyed working on this.” 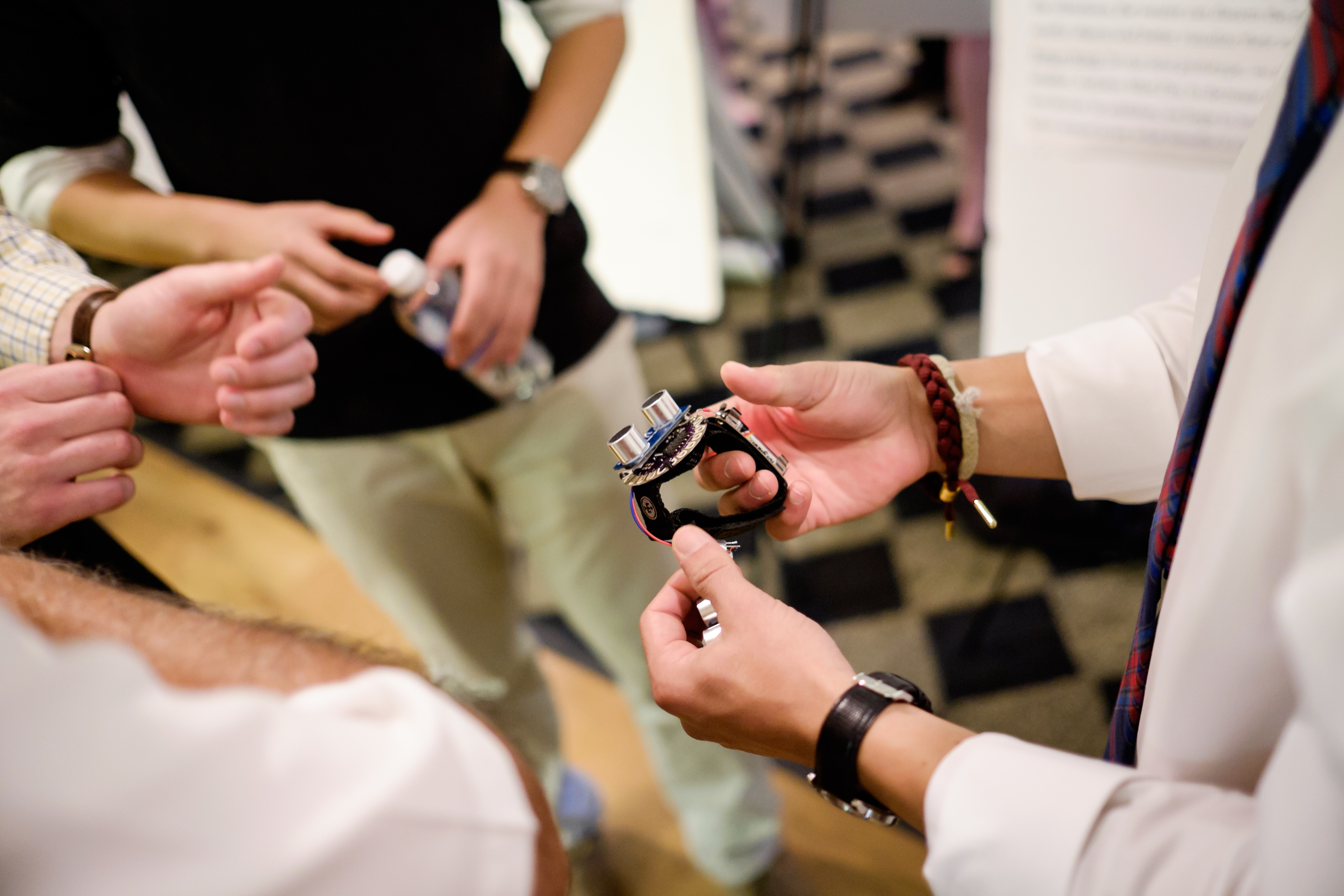 The prototype is made up of several components. It is powered by an Arduino Lilypad microprocessor, runs JAVA-like code written by Janes, and is combined with the sonar distance sensors and two cellphone vibrating motors. It measures the distance of objects and provides feedback via vibrations to the user. The frequency of vibrations is proportional to the distance from the detected object, allowing the user to accurately discern an obstacle’s proximity; they get faster as it draws near.

To test their device, the team turned to sophomore Kathryn Webster, a blind student who navigates campus with her guide dog, Enzo. “I’ve never heard of any of this kind of technology before, and I was eager to come in and test it,” she said.

One of Webster’s difficulties on campus is dealing with whether doors into buildings or classrooms are open or closed. She tested the device without Enzo and found that it vibrated as she approached a closed door and stopped when it was opened.

“Of course, I was hesitant, but it was really cool,” she said.

Next steps include fine-tuning the device to make it smaller and more aesthetically pleasing. And they want to keep it affordable – all of their parts and materials cost less than $60. They are also trying to figure out ways to minimize the amount of power it uses because they would like to make it run off a watch battery. Chang, a student from Beijing, China, suggested that a small solar panel like ones used on calculators could be added to supplement the battery power. Prado and Janes agreed that was a good option to explore.

Chang has learned some hands-on skills like soldering as the group figured out how to put device components together. He is hoping to double major in business and computer science. Janes, who plans to eventually go to engineering school, said bringing together students from different disciplines has worked well because they each bring something valuable to the project.

“We’ve learned that you’re really only limited by your creativity and what you can think up,” he said.

Editor’s note: See the coverage this story received from local and national media, Fox 8 and the Associated Press.

The Associated Press also did a video story that was picked up by the WashingtonPost.