After leading Wake Forest University for 15 years, President Nathan O. Hatch announced today he intends to step down at the end of the current academic year.

“With a grateful spirit for all that we have done together, I share that [my wife] Julie and I intend to retire from Wake Forest University on June 30, 2021,” Hatch said in a message to the Wake Forest community.

Hatch had intended to announce his 2021 retirement plans earlier this year. When the COVID-19 pandemic struck in March, Hatch and the Board of Trustees decided to postpone the announcement while Wake Forest addressed the immediate challenges and charted a way forward. While acknowledging there is more to be done to assure a successful conclusion to the academic year, Hatch and the Trustees felt that now is the appropriate time to make the announcement.

“It has been the adventure of a lifetime to lead Wake Forest with you.” Nathan O. Hatch, Wake Forest President

“I continue on in these next months with many of the same emotions that have driven my time at Wake Forest – excitement for what we can accomplish for our students, enthusiasm for the ways we can explore and innovate within higher education, and a strong belief in the core values that have anchored this institution, shaped our community and will see us into the future,” Hatch said.

Gerald R. Roach, Chair of the Board of Trustees, expressed appreciation for Hatch’s exceptional leadership.

“President Hatch’s integrity, humility and unparalleled vision inspire our community and enhance our belief in the institution and one another.” Gerald R. Roach, Chair of the Board of Trustees

“His excellence allows us to heighten our sights for what is possible for Wake Forest. The next president will benefit from his steadfast dedication to the University and the broad institutional momentum he enables,” Roach said.

Roach will oversee the search for the next president, which will begin immediately. Regular updates and information regarding the search and transition process will be available on the Presidential search website. If needed, Hatch said he will continue to lead Wake Forest until a new president takes office, even if that extends beyond June.

Hatch was named Wake Forest University’s 13th president on July 1, 2005. He came to Wake Forest from the University of Notre Dame, where he began his career as a history professor before moving into administration.

Hatch’s presidency has been marked by a commitment to educating the whole person, developing leaders of character and honoring the mission of Pro Humanitate.

Under his leadership, Wake Forest has transformed the college-to-career experience, pioneered test-optional admissions among top national universities, made strategic realignments in business and medicine and united alumni, parents and friends to support Wake Will Lead, the largest fundraising effort in the University’s history. He has combined bold initiatives with an unwavering commitment to the liberal arts and the residential college experience.

Developing programs for leadership and character: Wake Forest has long been a place known for its efforts to form leaders who embody intellect and virtue. On this foundation, the University has built a Program for Leadership and Character to support related scholarship and educate future leaders. 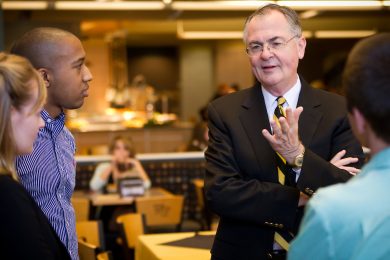 Strengthening face-to-face connection: In a world that is increasingly linked via technology, Hatch has emphasized the art of face-to-face connection. He implemented a three-year residency requirement for undergraduate students to provide more opportunities to collaborate, engage in conversation and solve problems together. He extended that philosophy to the entire Wake Forest community through Call to Conversation, an international movement to shape more meaningful conversations.

Realigning medicine: This month, Hatch was instrumental in creating the next-generation academic health system. Atrium Health and Wake Forest Baptist Health, including Wake Forest School of Medicine, officially joined together as a single enterprise. This will position all three for greater long-term success and make Wake Forest one of the largest educators of physicians and other medical professionals in the state. Earlier, he helped lead the integration of Wake Forest University Health Sciences with North Carolina Baptist Hospital – each with revenues of some $1 billion dollars – under a single entity with common management and a single CEO.

Enhancing holistic wellbeing: Hatch’s strategic vision included investing in academic, residential and athletic spaces that enhance all aspects of students’ wellbeing. Wake Forest’s creation of the Office of Wellbeing, the transformation of the historic W. N. Reynolds Gym into the Wake Forest Wellbeing Center and other comprehensive initiatives reflect the University’s leadership among universities focused on holistic wellbeing. 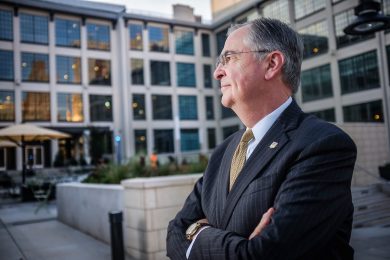 Expanding Wake Forest’s presence: Under Hatch’s leadership, Wake Forest expanded its presence locally and nationally. Beginning in 2017, the University launched new academic programs in biomedical sciences and engineering at Wake Downtown in Winston-Salem’s Innovation Quarter, bringing the medical school and new undergraduate STEM programs under one roof. Wake Forest also established the Charlotte Center as a hub for graduate business education and other programs in uptown Charlotte. The University also launched programs of study on each coast of the United States. Students can study for a semester at Wake Washington in Washington D.C. or at Wake West in San Francisco.

Uniting business programs: Wake Forest’s separate undergraduate and graduate business programs were combined into one under the leadership of the Dean of the Business School. Farrell Hall houses the School of Business.

Rethinking the college-to-career experience: Wake Forest has been at the forefront of transforming the traditional, outdated concept of “career services” into a holistic, four-year approach to personal and career development.

Advancing diversity, inclusion and equity efforts: As Wake Forest continues to work on providing a welcoming community for all, Hatch created the President’s Commission on Race, Equity and Community; supported the work of the Slavery, Race and Memory Project; issued an institutional apology for the University’s participation in slavery; increased the number of minority students studying at Wake Forest; and started the Magnolia Scholars program for first-generation college students.

Opening doors of opportunity: Under his watch, the Magnolia Scholars program has provided financial support and mentoring for more than 300 first-generation Wake Forest students. Through the recently concluded Wake Will Lead campaign, student debt has been reduced by 30 percent and the University raised more than $350 million to support student scholarships and financial aid.

Hatch has taken on several national higher education leadership roles. He has served as chair of the National Association of Independent Colleges and Universities and on the board of the American Council on Education.

As a respected leader in college athletics, he chaired the NCAA Division I board of directors and shepherded NCAA reforms designed to better support student-athletes and member schools. NCAA President Mark Emmert, ACC Commissioner John Swofford and others across the country have acknowledged the key role he has played in charting a way forward for college sports.

In 2015, he was inducted into the Academy of Arts and Sciences, one of the nation’s most prestigious honorary societies, in recognition of his academic achievements and his higher education leadership. His book, “The Democratization of American Christianity,” has been recognized as one of the most important in the study of American religion and garnered several awards.

What Leaders Have Said

“Nathan Hatch has really solid beliefs in academic integrity and the importance of education as a way to bring people up. First-generation students are getting a magnificent opportunity.”
— Condoleezza Rice, higher education colleague, friend and former U.S. Secretary of State

“Nathan is a very calm, even person, doesn’t fall for distortions and exaggerations and keeps his mind on the values at stake.”
— Richard Brodhead, former president of Duke University

“Dr. Hatch is a counterweight in a society that tells us you have to toot your own horn and be your own advocate.”
— Jim O’Connell (’13), Wake Forest graduate and Rhodes Scholar

“I see how consistent he is in all his roles. Consistent in his character, in his ability to develop trust, in his ability to be a servant-leader and not to be the center of attraction, but yet to be a visionary, to add real inspiration to a conversation.”
— Steven Reinemund, former Dean of Wake Forest School of Business and former CEO of Pepsico